Here are my views about the recent revelations. First of all I’m glad this information is now available to the public and I’m angry because of what was done to censor and control public discourse about important issues like corruption and Govt crimes.

Twitter has become a spy agency and a censorship tool for the deep state in collusion with the Democratic Party. The same is happening at every big tech company today. They limit political speech as well as leaks about crimes and corruption by the Government and politicians.

The Democratic Party has surrendered to the power of the deep state, a group of spy chiefs and corporate elites in the war and security business and their vast network of protected billionaire associates who control the media and big tech. Dems chose this path to remain in power.

Monopolistic big tech companies have surrendered to the deep state and partnered with the Democratic Party to keep their monopolies going. When was the last time any of them was broken up because they accumulated too much power? Tech billionaires love a seat at the power table.

This silencing and manipulation has completely destroyed democracy. Not just opinions are being manipulated but the devices that count our votes. The deep state can turn every cell phone into an open mic and backdoor any PC. What do you think they can do to voting machines?

This is the biggest criminal conspiracy in history. Spy agencies are now running the show. Their budgets and powers are increasing every year. They spy on all of us and have dirt on everyone. Politicians who don’t work with them have no future. They are removed by scandal, etc.

A NOTE TO READERS:

This article is a little different than many of my previous articles. I have chosen to publish this document A.S.A.P. without any prior analysis. In truth, I have not even had time to read it at all. The point is to make this information available to the general public as soon as possible in order to enable YOU to give your opinions.

Please share this article far and wide and invite everyone you know to express their opinions in the comment section below the article.

ALSO – Please feel free to record an audio or video expressing your opinion regarding the “conceptual zero draft” of the WHO’s proposed “Pandemic Treaty” and post the link to your audio or video in the comments below.

By Club design, DeSantis will be last one to enter. However, all will be working in concert during the preparation phase.

Where is the RNC winter (Jan/Feb) convention?

I love the Rebel Alliance. This crew of invisibles is the reason I never get despondent.

This is a good example of an authoritarian abuse of speech and language. A powerful person (who spent $150 mil on PR), “reasons” falsely on national TV, thus defining the narrative that is soon to follow. A narrative like this is a story that defines how we speak and what we are allowed to say. Fauci and many others did what Gates is doing in this video. These public statements define the conversation and even many of the vocabulary words that will be used to bracket it—antivaxxer, covidiots, “The Science”, conspiracy theory, etc. Masking is an extension of language or a semiotic that signals obeisance to the narrative. For people within a culture to communicate they must have rules for speech and what words means. Properly, those rules and definitions in Western society are established through transparent, open, uncensored speech and reasoning based on evidence. During covid, it was the alternative medical and scientific views that carried on our proper tradition, while people like Gates and Fauci were hijacking it for their own perverse interests. ABN

The Senate Leadership Fund is the Political Action Committee (PAC) controlled by Mitch McConnell.  Within the quarterly FEC filings of the Senate Leadership Fund, we discover that in addition to funding Joe Biden and Democrats, the ponzi scheme known as the FTX cryptocurrency exchange was also funding Mitch McConnell with $2.5 million. [Document Source]

There is a lot of speculation about U.S. taxpayer funds going to Ukraine, then transferring into the FTX crypto exchange program, then exiting back out with FTX donations to the DC politicians who provided the Ukraine funds.  If this ends up being accurate, then the FTX crypto currency operation was being used as a laundry system to funnel money from congress through Ukraine and back into the pockets of politicians.

Do not look for DC politicians to investigate or expose themselves in this potential laundry operation. 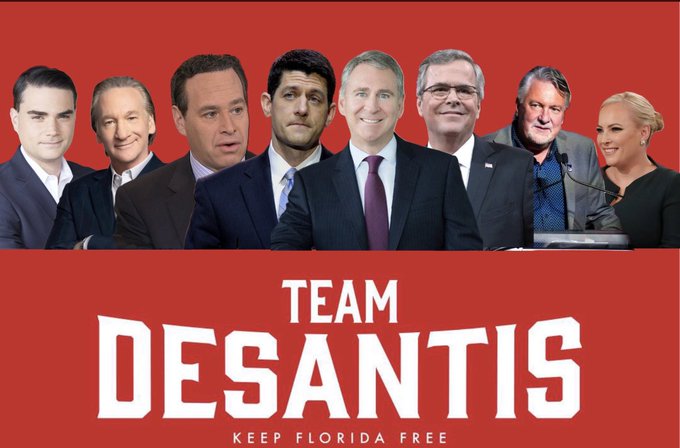 Billionaire Citadel Investment hedge fund CEO Ken Griffin (pictured above, center) is one of the top purchasers of Florida Governor Ron DeSantis for a 2024 presidential bid.  In a recent article for Politico, Mr. Griffin openly explains what he expects from his investment in DeSantis:

Based on some data collected at the website: OPENVAET (nice play on acronyms there) our RG colleague notes that the bans really started coming in after the first Biden VAX mandated at the beginning of September 2021 and then directly after Elon’s first signs of wanting to pursue Twitter.

link to text and image

Sad to contemplate how interconnected all the top Big Money is. ABN

The campaign to pull corporate advertising from Twitter, following its purchase by SpaceX founder Elon Musk, is being led by a network of left wing dark money activists with ties to prominent Democrat politicians and mega donors.

An advocacy group formed in 2020 called Accountable Tech is organizing the pressure campaign, which has thus far succeeded in having the likes of Pfizer, Audi, General Mills, and other corporations pull their advertising expenditures from the platform.

Accountable Tech has taken credit for organizing an “open letter” signed by dozens of progressive groups, which demanded that multinational corporations cease advertising with Twitter immediately.

At this point in history, anyone who is claiming the U.S. Government is not directly coordinating with social media platforms to shape opinion and cull information adverse to their interests, is being intellectually dishonest.   There is simply too much evidence of the intelligence apparatus, specifically the Dept of Homeland Security, being enmeshed with the platforms of Twitter, Facebook, Instagram, Google and Microsoft.

The DHS justifications for the relationship all involve claims of ‘national security’ and domestic terror threats.  However, the simple and transparent motivations of the relationship are all political.  The DHS terms of “disinformation, misinformation and malinformation” are simply excuses for the platforms to adhere to the demands of the government and censor or remove discussion that is against the interests of those in power.  The truth of this is in the sunlight now.

That said, the relationship between the intelligence community and social media is one of mutual benefit.  DHS gets to conduct surveillance and control permitted speech in the public square, and in return Big Tech gets assurances of their ability to continue monopolistic enterprise and simultaneously receive subsidies on operational costs.  The legislative branch allows this synergy without oversight because the legislative branch is in alignment with the larger ‘national security’ ruse.