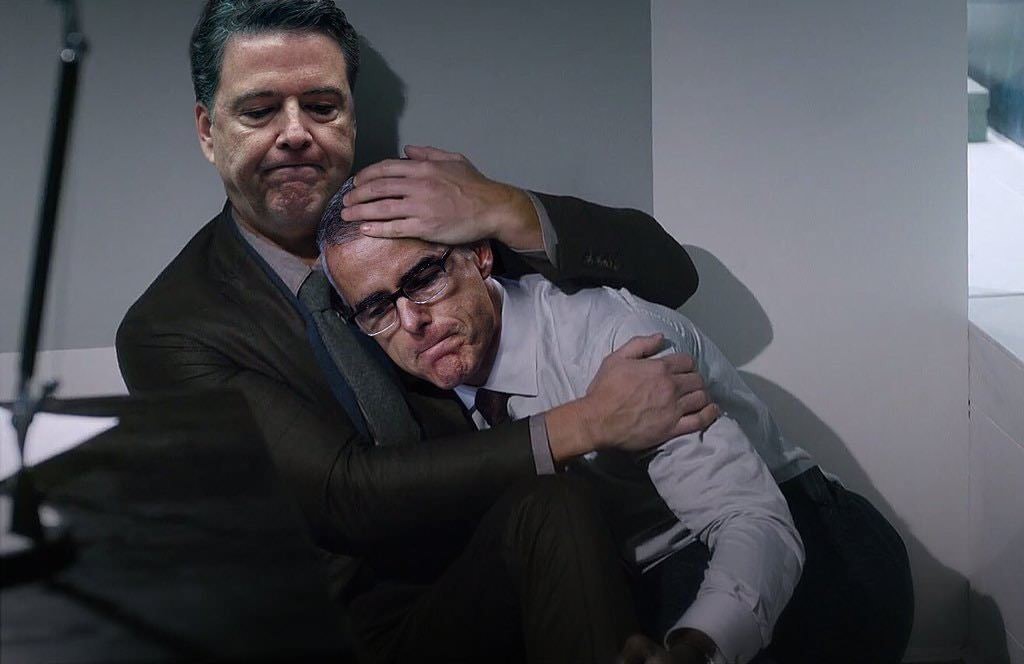 This open letter is well-worth reading. My guess is over 50% of Americans are at least familiar with the topics discussed and would agree that full transparency is imperative if we are going to have a government trusted & respected by the people it supposedly represents.

Corruption within the Obama administration (including holdovers in the Trump admin) was so widespread, all branches of government were implicated. The author of this letter argues that the FISA court (FISC) may be our last hope because the FISC has the power to call out government actors who presented false information to it.

That said, the rot in Washington is much deeper. Thousands of illicit searches of the NSA database were conducted against American citizens. Michael Flynn was almost certainly framed by the FBI. The CIA, guided by John Brennan, almost certainly spied illegally on the Trump campaign and presidency. Crossfire Hurricane was as much a means to hide past offenses of the FBI & CIA as it was to continue with them. Mueller and his team almost certainly knew full-well there had been no “collusion” with Russia, and yet they persisted in harassing the president and his people for two years.

Former HPSCI Chairman, and current HPSCI ranking member, Devin Nunes appears on Fox News with Maria Bartiromo to discuss several matters of importance. One of the critical topics touched is the ongoing investigations of Obama era intelligence and political surveillance via the DOJ-NSD FBI, CIA, DNI and State Dept.

Representative Nunes hits the key point when he highlights current redactions and current decisions to classify ongoing investigative documents. It is critically important to accept this reality. There are current intelligence officers and career officials in place hiding material by labeling evidence as classified. A recent example was the December 9, 2019, inspector general report about the manipulation of FISA. (Open Letter to Attorney General Bill Barr – “We The People” Already Know…)

This interview happened in 2017 but is well-worth listening to today. As bad as the Franklin Scandal was, it was “just” one tentacle on a much larger beast. And as bad as child abuse for sexual purposes is, that too is just one (even larger) tentacle on a much larger beast. That beast itself also murders, maims, and tortures children, both physically and psychologically.

It does this for various reasons: to cover up crimes and discredit witnesses, but also to destroy the communities the children belong to. I have personal knowledge of one, now deceased, actor in the Franklin Scandal. His name is Peter Citron. I know enough about Citron to be certain that he belonged to a large group of prominent child traffickers. And I also know that he was connected, directly or indirectly, to another group that maims and kills children and young people.

It is very difficult to prove child trafficking for reasons Bryant goes into. Children who are abused develop psychological problems and become marginalized. They also feel fear, shame, and profound doubt that anyone will believe them or ever do anything about any of it. Children who have been maimed are even less able to come forward. Those who have been murder obviously can do nothing at all.

From last month: Nick Bryant | From Franklin to Epstein: The Cover-Up Continues

This is a long interview with Joe Rogan, but well worth the time. Ties together many themes from the sixties and before (and also resonates with me personally).

Bass discusses the very severe economic ramifications of the Wuhan virus in China, USA, Hong Kong, and rest of world. He believes the West’s relationship with China is “intractable” and cannot be fixed. If you have any interest in this subject, don’t miss this. Bass provides many insights you will not find elsewhere.

New facts may come to light and alter the picture we have today. But as of now, it does seem that China (CCP) at the very least deliberately concealed the seriousness of their COVID-19 outbreak, thus causing global pandemic.

What’s worse is it also looks, as of today, that they may very well have engineered the virus and released it deliberately or negligently. Either way, it’s bad. Of course, deliberately made and deliberately released is the worst.

This double-bind they are caught in—either way, we lose—is their probable motivation for unleashing COVID-19 on the world if that is what they did. And almost all signs point to some version of them having done that.

The least version of this scenario in their minds would be: “We are more used to adversity than the West/USA and we are better at controlling our population due to our authoritarian system. Therefore, we will survive this COVID-19 better than the West, so it is to our advantage to cover it up.”

The worst version of this scenario in their minds would be: “We have developed lethal viruses and we have vaccines for them. Now is the time to unleash them on the world. We will prevail and within a short time control the entire world. We will start with COVID-19 and follow up with a second or third virus as conditions dictate.”

I would be astonished if Trump and the Pentagon have not considered all of the above and much more. Thus, I must conclude that we are already responding to the threat.

Seizing CCP money in the West is one response already being discussed in public. What will we do about potential follow-up viruses? I don’t know. I do not see how a second or third bio-attack, if launched, can be prevented or contained since one could easily be initiated in thousands of places simultaneously.

There is a lot of good information in this video. The ending is weak and avoids the inescapable subject of war though the topic is raised elsewhere in the film. Several very good short interviews and a well-organized narrative of recent events.

Since the whole world is now fundamentally at war with the Chinese Communist Party, I am supplying a PDF of Unrestricted Warfare. The text is roughly explained below.

Unrestricted Warfare (超限战, literally “warfare beyond bounds”) is a book on military strategy written in 1999 by two colonels in the People’s Liberation Army, Qiao Liang (乔良) and Wang Xiangsui (王湘穗). Its primary concern is how a nation such as China can defeat a technologically superior opponent (such as the United States) through a variety of means. Rather than focusing on direct military confrontation, this book instead examines a variety of other means. Such means include using International Law (see Lawfare) and a variety of economic means to place one’s opponent in a bad position and circumvent the need for direct military action. (Link)

The CCP did not disclose human-to-human transmission of COVID19 until January 20 of this year. They have known of the virus since late November or early December of 2019 and have engaged in covering up crucial information about it ever since. Doing so ensured the virus would spread throughout the world.

British officials are quietly accusing China of spreading disinformation about their success with the virus while simultaneously downplaying its number of cases  “by a factor of 15 to 40 times.”

No one who knows the Chinese Communist Party has believed otherwise. The CCP has been a lying parasite on the world trade system since it entered the WTO. Having lost the trade war, which would have merely rationalized their trade positions, the CCP then covers up the worst virus attack the world has seen since the Spanish Flu.

Covered it up or created it. It is reasonable to suspect the CCP either created or bred COVID19 in its Wuhan BSL-4 lab and then advertently or inadvertently released it, knowing it would spread throughout the world.

This letter to Nature argues that COVID19 was not manufactured in a lab: The proximal origin of SARS-CoV-2.

Maybe that’s good science and maybe it’s even true that the virus was not “the product of purposeful manipulation” of the splice and dice kind, but it still could have been found in nature and bred in a lab for high contagiousness and enough lethality to paralyze the world.

I am not a virologist and the above is speculation. Furthermore, I am not trying to sensationalize what has happened. I am saying it’s a simple fact that not telling the world the truth about your own epidemic will cause a worldwide pandemic. And that is tantamount to an act of war.

An unnamed British official said “there has to be a reckoning when this is over.” A very nice way to say the CCP is finished. I pray there will not be kinetic war, but something dire is going to happen. The CCP’s handling of COVID19 is sinister, aggressive, hostile, and unforgivable.

Relevant: The Coronavirus and the Culture War

This information is has not been confirmed but it comes from a famous Chinese dissident who also happens to be a billionaire. I do not believe he is lying. His information may be wrong, but many other signs point to a large pandemic that can no longer be contained. Watch the vid and decide for yourself.

1,200 bodies are burned every day in mobile incinerators in Wuhan alone.

Meanwhile, China has put in an order for enough incinerators to burn 30 MILLION people every day.

EDIT: Here is another tape from Guo.

MilesGuo: CCP is spreading #COVID19 to the whole world. Make the world in chaos so the regime can survive longer. In HongKong,and it will mainli infect the police and law enforcement.Why? …What will happen if HongKong police go out to expose the truth?… pic.twitter.com/5AY9s88JDQ

Whereas it is most apparent, that the Multitude of Coffee-Houses of late years set up and kept within the Kingdom… have produced very evil and dangerous effects… as Tradesmen and others, do therein mis-spend much of their time, which might and probably would otherwise be iimployed in and about their Lawful Callings … and by occasion of the meetings of such persons therein, diverse False, Malitious and Scandalous Reports are devised and spread abroad, to the Defamation of His Majesties Government, and to the Disturbance of the Peace and Quiet of the Realm; his Majesty hath thought it fit and necessary, That the said Coffee-houses be (for the future) put down and supressed, and doth… Strictly Charge and Command all manner of persons, That they or any of them do not presume from and after the Tenth Day of January next ensuing, to keep any Publick Coffee-house, or to Utter or sell by retail, in his, her, or their house or houses (to be spent or consumed within the same) any Coffee, Chocolet, Sherbett or Tea, as they will answer the contrary at their utmost perils. (King Charles II Of England Banned Coffeehouses In 1675)

Spygate will never be settled until we hear testimony from Joseph Pientka and learn what he wrote on his FBI 302 interview forms.

“After the FISA Court was notified in about the issues (July 2018), and before the IG report outlining the conduct of SSA1 was complete (Dec. 9, 2019)… sometime in mid 2019 Joseph Pientka was promoted by FBI Director Christopher Wray and transferred to the San Francisco FBI Field Office where he showed up on their web page.”

Why was Pientka promoted and why is his name always redacted in FOIA documents and why did the San Francisco FBI office recently remove his name from their website?