It’s widely known that when working memory is overtaxed, confusion results, skills decline, while feeling of frustration and anger may arise. The reason for this seems to be:

Feedback (top-down) coupling broke down when the number of objects exceeded cognitive capacity. Thus, impaired behavioral performance coincided with a break-down of Prediction signals. This provides new insights into the neuronal underpinnings of cognitive capacity and how coupling in a distributed working memory network is affected by memory load. (Working Memory Load Modulates Neuronal Coupling)

A well-written article about this study contains the following diagram and explanation: 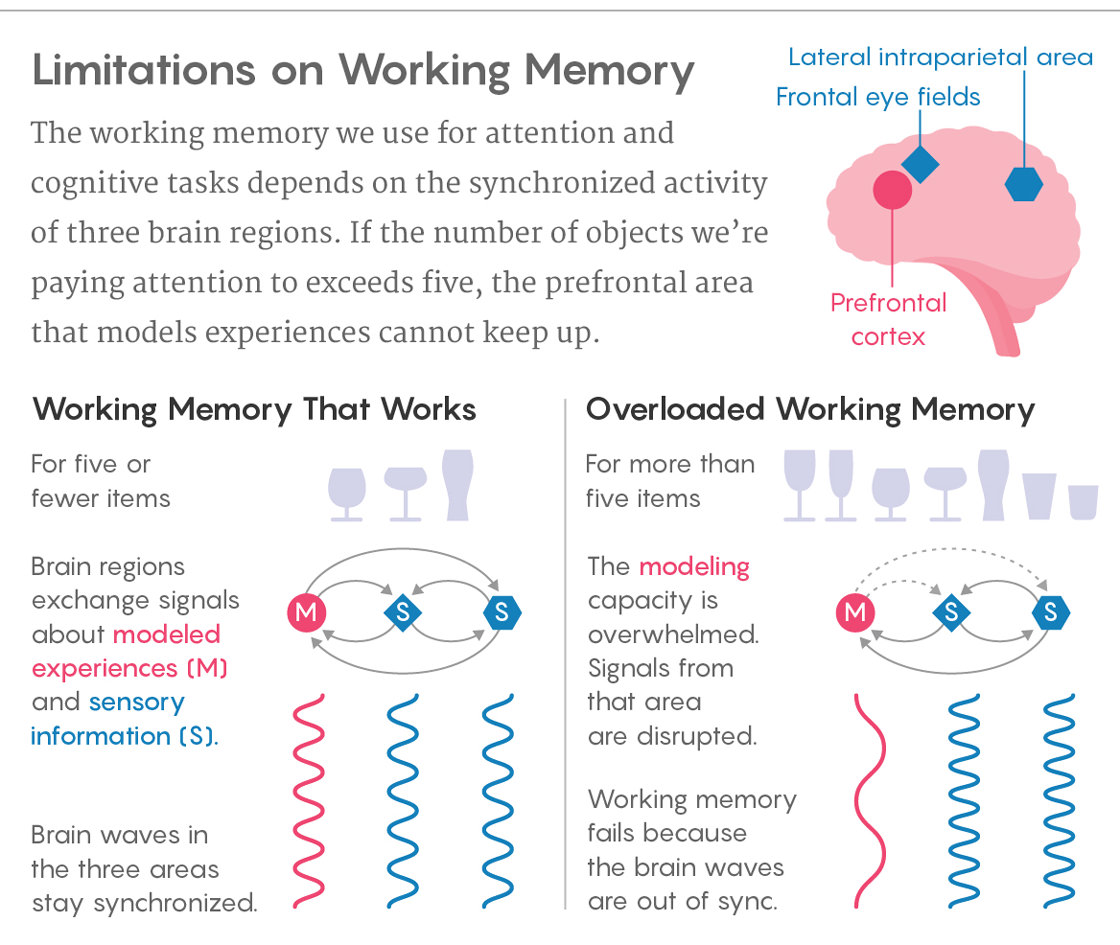 This article—Overtaxed Working Memory Knocks the Brain Out of Sync—also contains the following passages and quote from one of the study’s authors:

…The prefrontal cortex seems to help construct an internal model of the world, sending so-called “top-down,” or feedback, signals that convey this model to lower-level brain areas. Meanwhile, the superficial frontal eye fields and lateral intraparietal area send raw sensory input to the deeper areas in the prefrontal cortex, in the form of bottom-up or feedforward signals. Differences between the top-down model and the bottom-up sensory information allow the brain to figure out what it’s experiencing, and to tweak its internal models accordingly. (Emphasis added)

Working memory works via connections between three brain regions that together form a coherent brain wave.

Notice that “an internal model of the world,” which is a “top-down signal” within the brain wave feedback loop, predicts or interprets “bottom-up” sensory input as it arrives in the brain.

I believe this “top-down signal” within working memory is the reason FIML practice has such enormous psychological value.

FIML optimizes human psychology by helping partners intervene directly into their working memories to access real-world top-down signals as they are happening in real-time. Doing this repeatedly reliably alters the brain’s repository of top-down interpretations, making them much more accurate and up-to-date.

The model of working memory proposed in this study also explains why FIML can be a bit difficult to do. Partners must learn to allow a FIML meta-perspective or “super top-down” signal to quickly commandeer their working memories so that analysis of whatever just happened can proceed rationally and objectively. It does take some time to learn this skill, but it is no harder than many other “automated” skills such bicycling, typing, or playing a musical instrument.